Making time to take care of yourself can be hard. During lockdown, it felt like life was in a loop of work, home, work, home, work, home. By the time you get home, you just want to crash in front of easy watching TV. I have the same issue with writing my blog. I feel so much better for doing this but it does take time and effort like all self care does. 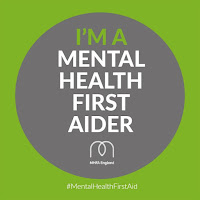 For many parts of the world September is Suicide Prevention Month however organisations big and small come together with the WHO and the International Association for Suicide Prevention to mark 10th September as World Suicide Prevention Day.
Globally, over 800,000 suicides are reported and there are many more which either go unreported or don't fit the criteia for suicide in the death certificate of a country. As I type this the Office for National Statistics has released the latest data with headlines following the common theme of "Male Suicide at highest rate in 20 years".
Occasionally I go back through my blog to revisit my posts. They mark how I felt and thought as different stages of my mental health journey but they also indicate how far we have come as a society. One of the posts I am most proud of, conveniently for World Suicide Prevention Day 2016, was written by one of my closest friends and her view of not only my struggles but also of her Grandfather. It is a powerful read you can find here.
Stigma was an incredible oppressive force when my mental health was at its worst. I can clearly remember how liberating being suicidal was - I could speak out because I had literally nothing to lose. It was that with the right support from friends, family and the NHS that supported my recovery - something which I'm proud my blog has recorded.Suicide can be a difficult subject to approach but once you cross the threshold with compassion and honesty, its a stigma that seem ridiculous.
Recently, thanks to the NHS Trust I work for, I attended a two day course and qualified as a Mental Health First Aider.  Why would any employer want a Mental Health First Aider? It's another cost
In a previous post we've discussed the business case for taking the mental health battle head on. In that post we discussed how research by Soma showed the businesses that record and track mental health make up to three times of the profits compared to ignorant competitors. In that post we also discovered how every 80p of investment in prevention and support for mental health and well-being at work saves £4 in costs whether that is sickness, loss of business or, as my case showed, legal fees. In the end, I argued that with the potential saving of £9 billion per year to the UK economy, that businesses big and small couldn't afford not to invest in mental health and well being of their staff and customers.

The course is written by MHFA England who are working with the aim that by having more and more Mental Health First Aiders in businesses and organisations that stigma can be more routinely battled and that awareness raised more often. It also hopes that earlier intervention can be made for those needing support and prevent staff, friends and family reaching crisis - like I did in 2015.
To start with I did have to confront some anxiety. Would this course be upsetting? Would it stir and prevoke feelings I don't want? Would the people there be tolerant of me?
In hindsight, I shouldn't have worried but anxiety can be pair of concrete boots in the murky canal of life if you are unable to push through with useful healthy coping mechanisms. In my example, I tried to imagine some of the content like icebreakers and discussions of suicide and think about how much I was comfortable to share or say.
It always amazes me how little is said about mental health and yet, when the tap is opened and that awkward threshold is crossed, everyone has some experience. Whether it is friend, a relative or a patient or customer. When you begin to realise how much mental health has touched every person, you begin to realise how few people will judge you in a negative way.

The role of being a Mental Health First Aider isn't to solve every problem or become Counsellor Deanna Troy of your organisation; in the same way your First Aider isn't your organisation's Paramedic or Dr Beverly Crusher. It's more about having someone ready to listen and offer a signpost whether it be to a manager, to ACAS, to a union, to the GP, to a local support group or in times of crisis to the emergency services. The problem doesn't have to be a psychotic episode but it can be. It can be helping someone after a nasty call or offering a calming cup of tea after the loss of a loved one.

Helping another person, even if its just listening, can be incredibly rewarding. In fact, you can save a life.

If you are interested in becoming a Mental Health First Aider, email your HR department today or have a look at https://mhfaengland.org/