We Were Pregnant - Dad's Diary

By our maths, we were around 11 weeks pregnant although speaking to the GP it could be 9-11 weeks. The medical term is "anembryonic pregnancy". In some parts of the world its called a blighted ovum which sounds more like a parasite affecting this year's crop harvest. 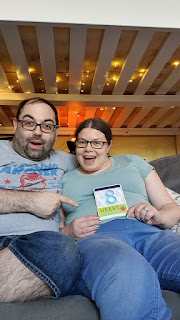 Below is a video Caroline initially wanted to record. She's been upset and hurt but is trying to be pragmatic about the whole experience. Below the video I'll share a bit more my internal monologue. You'll also find links to key resources.

It's good to openly talk and raise awareness.

I was shocked when I found out we were pregnant. We were trying but I knew that it doesn't always happen right away. Some couples try for months or years and then the babies come along like buses.

We were already making small changes to our lives and Caroline changed her diet too. We started slowly cleaning, decorating and nestling in our flat. In the early days, we felt that it was work that needed doing either way but as the weeks passed we slowly became more and more confident that this was becoming real. In fact over the past couple of weeks we started shopping for maternity wear and buying baby magazines. I started reading books on parenting especially aimed at new dads. Our tracking apps showed the acorn slowly growing from acorn to catapillar.

It was around Saturday 23rd May that Caroline has spotting. For men like me with little biological knowledge, this is wear tiny drips of blood appear either when your lady wipes herself or on her underwear. Caroline showed me some the tissues and aside from normal discharge (sorry, there isn't a better word!) there was trace samples of blood. Think a drip of red food dye in your bowl of icing.

A quick Google and text chat with midwife confirmed that it wasn't enough to be bleeding and monitoring it is the best course of action. I was worried but I needed to be a rock for Caroline and reassured myself that I'd had paper cuts produce more blood. I remember thinking that this couldn't be a miscarriage: you'd notice a catapillar and their sac falling out right?
Over the next few days the volume of blood increases. Still tiny pipette amounts. Again, still being strong yet secretly worried, I found a local private clinic that for a far more reasonable fee than I imagined would give us a reassurance scan the next evening.

Thursday evening arrived. Caroline's anxiety was through the roof. So was mine but again I had to be strong. Being 'the strong one' is something we seem to take in turns. Life can really wear you down.
They do an external and internal scan. To my eyes, it's the 1960's opening credits to Doctor Who. We had spoken about the worst case scenario. If I'm prepared for worst case scenario then anything else is an improvement. Right? Maybe not this time.

The sac is there but it's empty. They write a report and offer their sympathies before taking payment. As I mentioned in the video, it's not the outcome we wanted but it is the best £59 we've ever spent. Due to Covid19, I would be unable to attend any NHS scans. The thought of Caroline finding out by herself, alone, is horrific.

That night we spoke directly with my parents - knowing Caroline's parents would likely be in bed. In the space of a hour or so, Caroline went from being upset into angry into pragmatic. Eventually she became hopeful. Looking back, I was still being strong. I was in my old habits of emergency mode.

Some of info online has been rather 'it's bad luck, try again' which I feel I was woefully prepared for. I am little taken back how many couples have been 'unlucky' but felt they couldn't or shouldn't share their story.

We woke up positive on Friday 29th May. I'd done some research the previous night before bed while Caroline woke up early. We both agreed that many couples go on to have healthy pregnancies and babies and that maybe this time wasn't meant to be. It was the test run the body needs to get ready. By lunchtime, the spotting was increased and the occasional clot appeared. By early afternoon Caroline was on the Early Pregnancy Ward of Wexham Park due to the pain. She described the cramping as in waves and the level of pain being slightly more than her normal periods. I knew she was in pain and I could see it was worse than she was letting on. The lovely staff reassured her that the pain and cramping is OK. She is signed off work but will take it easy while her body resets. The current plan is to allow her body to expell the sac like some horrible mega period.
Total respect for women. I couldn't do this so easily.

It was Friday night when it hit me. I felt really low and sad. I think it was the first time I had actually sat still long enough for the words I'd been saying to become reality in my head. No baby. Not now anyway.

As the video was shared online - and please feel free to share my post too - friends and family reached out to us either in public or private. I still can't believe how many couples just go through similar events and feel they couldn't or shouldn't share it. I feel angry they had to be silent. It sad that their catapillar is negative quiet memory.

Even though our catapillers didn't become butterflies they were still part of our lives.

Caroline is in a fair amount of pain but has some time off to reset - body and mind. She can also have alcohol for the first time in a few months!
I'm OK. Now I'm able to sit down at home and think, I'm not as pragmatic as Caroline is right now. But there is a next time.
It's good to openly talk and raise awareness.

Thank you to the staff at the private clinic, Caroline's GP and our colleagues at Wexham Park Hospital.

My mind has been racing. Stuck in a loop for over an hour now. Despite my best efforts to clear it through mindfulness and controlled breathing, I'm just drawn back to the same loop. Stuck on anxiety and fear. 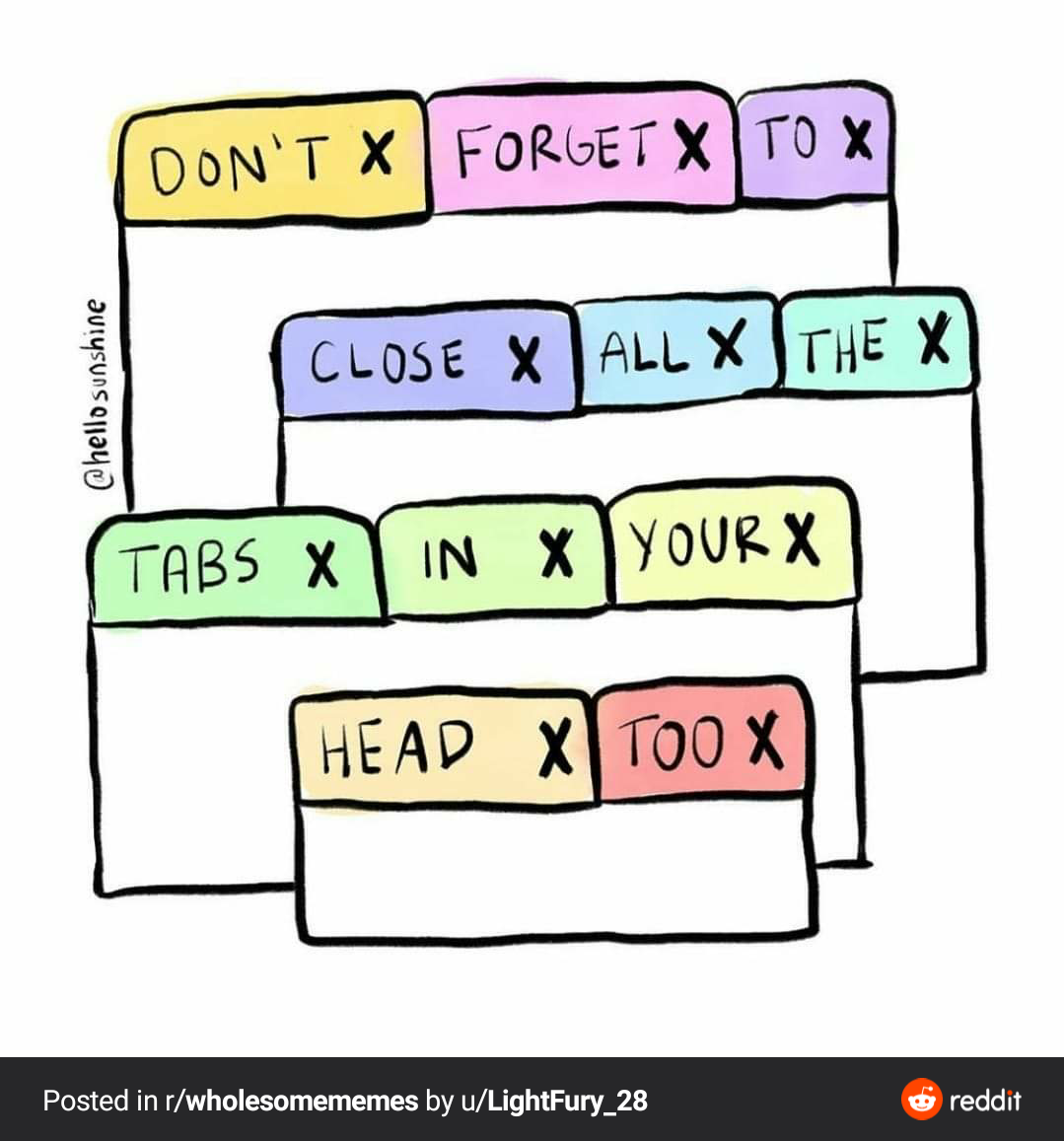 I've laid here for over an hour trying to focus on my inhale and gently letting go with the exhale only to find myself draw to the points below.
My first concern is my wife. Today is our 4 year anniversary of when we started dating. Most years we celebrate this with a trip to Brighton where our relationship officially started - a trip down the peir is better than celebrating in the pub of our first date. I can't go into every detail but I am concerned for her welfare and safety. Due to the medications she takes, she is more at risk than I am from this blasted Coronavirus Covid19. She too works for the NHS however her location is far more central in the hospital compared to the wooden outbuilding I call home. There isn't much I can do  but over the next few weeks maybe it is something we can address together for some reasonable adjustments to limit her exposure and risk. 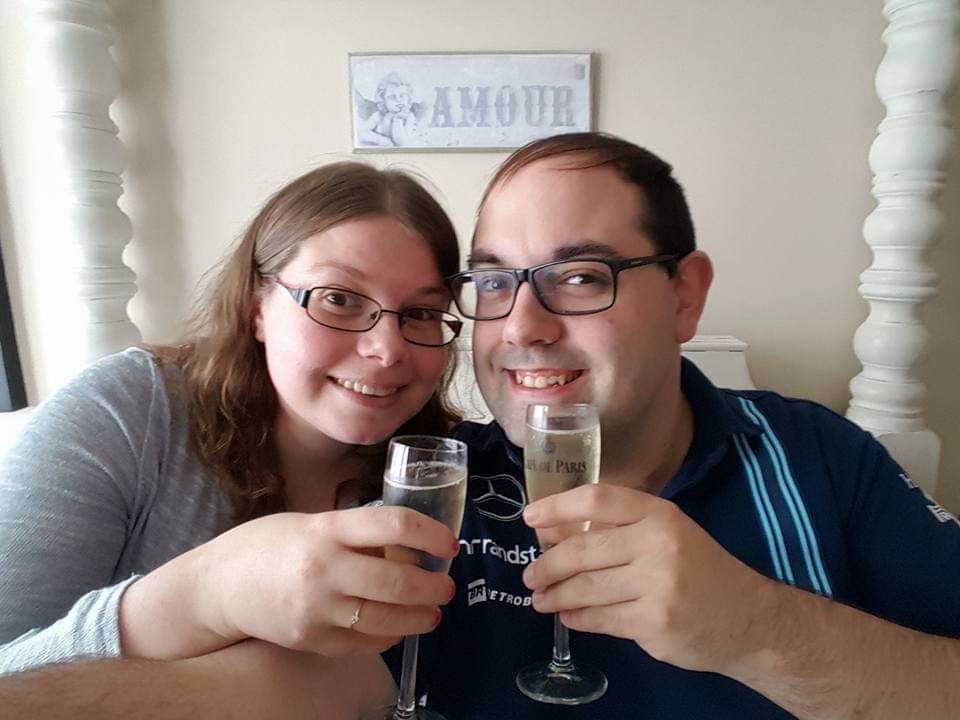 My Nan died at the start of April. My nan was a key role in my upbringing and for many years was the only reliable mother figure of my childhood. Much like my cousins, as I grew older I found my own hobbies and spent more time with my now wife. My nan ended up in a home last year and, maybe selfishly, I hadn't seen her since. I felt the last time I saw her, she wasn't 'Nan' any more. Maybe I was just being cowardly but I knew that she didn't know if I was there or not. I don't know how she died and due to conflict and Covid19, I don't think I'll be told. She was a brilliant parent to me and, while I regret I didn't spend more time with her over the last few months, I cherish the fun weekends we had together.
One of the key themes stuck in my head is my own work. Covid19 has stripped us of the ability to be with our closest friends and family which is key way to recentre and refresh ourselves. I have wondered if I have been becoming 'short fused'. Maybe with the pressure we all are. Work has changed as we've moved far from normality. In some ways the work has massively decreased but only to grow elsewhere. To paraphrase an email I sent a few weeks ago: it is a challenge but we will rise to it. The angry voice in my head is aware that some areas (not just NHS) have more support (maybe unjustifiably) and have been able to cope and adjust with more ease. Currently, I'm doing two jobs and my own self doubt questions if I'm doing either well. Why do they get better resources than us?
The hesitant voice in my head can't help but hope that everyone who is clapping now, remembers the efforts of everyone in the NHS and the public sector when they next stand at the ballot box. I wonder how many deaths were caused by the poor funding, the do more with less attitude that has screwed over too many key workers, over the past decade.
Either way, it will take months to recover to any normality after the pandemic is over. Please remember this when you next call your GP Surgery or hospital and expect to be seen 'lickity split'. 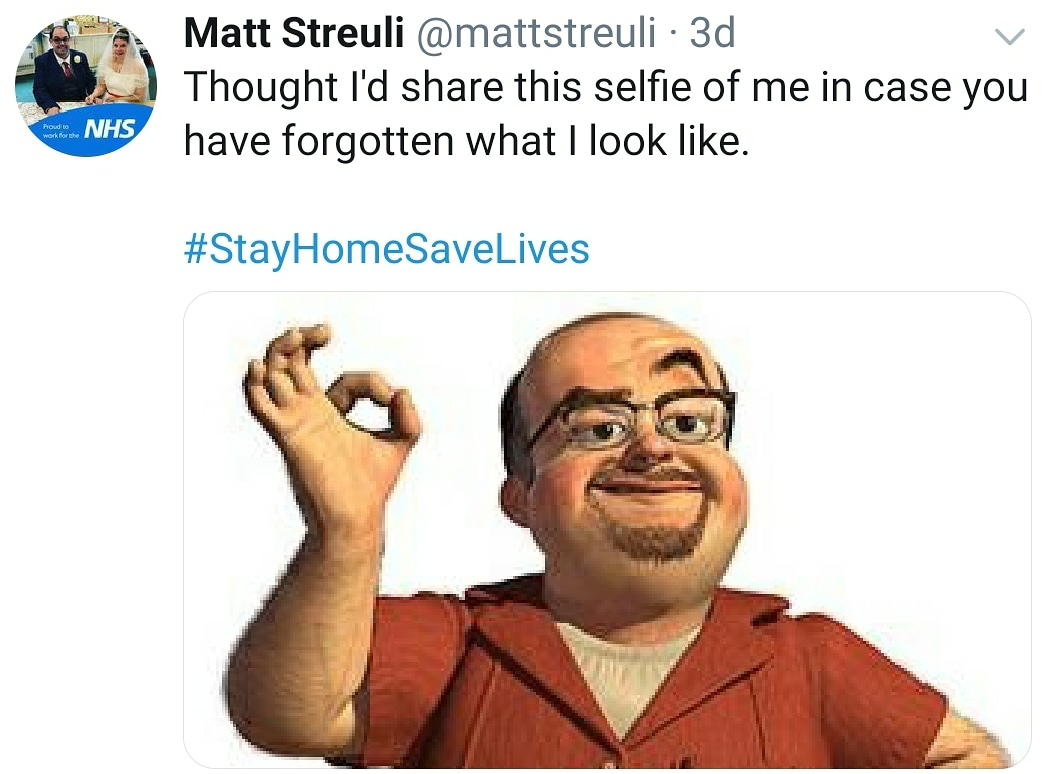 Perhaps I should focus on the positives. At least I am able to go to work, interact with different people and focus on projects. I'd like to be able to work from home a bjt but who knows. I have a very strong and supportive wife who makes me laugh and tolerates me when I'm low.
Since the early days of lockdown we've been streaming games and chat most evenings via YouTube. It's been a nice way to stay in touch with our friends rather than the desolate pings of a Facebook chat. We've met new friends who've stumbled across our stream, enjoyed our content and become part of the team. At the moment we play jackbox but I'd like to find new ways to interact with people. Would you watch a online chat show?
I hope you are keeping well. Please follow me on the socials to keep up to date with my latest adventures - even if they are more confined than they used to be.
Twitter/MattStreuli
Insta/MatthewStreuli
YouTube/MattStreuli 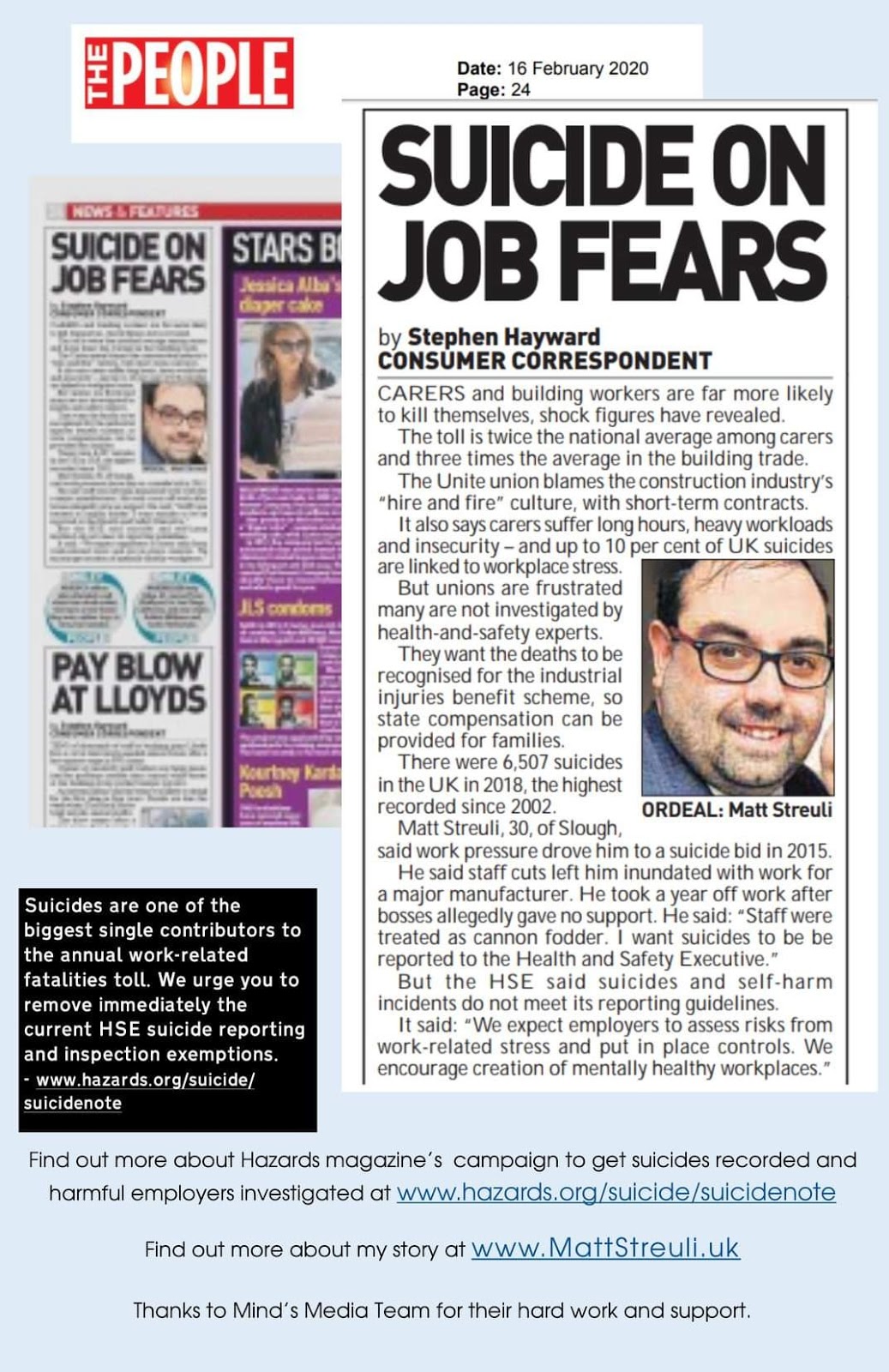