In my last post, I set the groundwork for  #MHAW16 or Mental Health Awareness Week. I also told you about a couple of wobbles but generally life has been good. 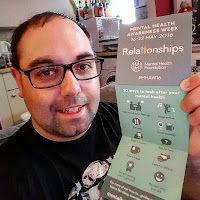 In case you are new to my blog (welcome by the way! Please have a look around), my Mum was alcoholic. From when I was 8 and she forced my Dad out the family home, I was her sole carer up until a few weeks before she died from alcoholic liver and organ failure.

Alcohol has always been a difficult thing for me. Only as an adult do I realise that it was a form of anxiety. My Mum's tipple of choice was Pinot Grigio... in 1.5 litre bottles from Oddbins.

"How do you explain you mother had multiple affairs forcing your father out the family home when you were nine and due to guilt and 3 or 4 deaths in the family and best friends the mother turns to dry white wine to deal with it resulting in a 13 year old boy learning to cook, clean and run a household plus his education whilst caring for said 47 year old alcoholic who then dies weeks after you run away and live with your father?"

I only tried wine when I started working at a Wine Store come Off License and went on Wine Courses. I found it quite therapeutic I guess to learn to appreciate wine for all of its flavours, textures and the culture around it. It turned an unhealthy relationship with wine into a sensible healthy one.

As you may of even seen from my instagram, over time I've worked through my issues to even 'over' enjoy a drink or two!

This is post 108 on this blog and sometimes I lose track of which disaster I have told you about but to stay on track, today I shall tell you about the second time I 'saw' my Mum. The reason this story is one I can tell is that it happened last week and triggered the suicidal self-harm low you might of seen reflected in my Social Media. Before I start, my friend has been wracked with guilt but there is no need to be - she did nothing wrong - as it is the way my mind or brain processes the stimuli.

We went out to a house party with friends. I had a few drinks and was tipsy but she had a few more. She had a bit too much fun to the point where the fun came back up. I can handle vomit on the floor or whatever but the noise of retching makes me want to gag. I felt a bit unstable, mentally, trying to get her safely back home. I've looked after drunk people before so I have no idea why that night it affected it me more. We got in a taxi and just a minute down the road it all changed. Perhaps it was the panic setting in but I suddenly had to work out how to look after my inebriated comrade (which we all do from time to time!) and appease the taxi driver. However, my mind just went all soggy. The wobbling it has been doing over the past few weeks got worse to the point where when I looked at my friend sat on the kerb, I didn't see her. Just how am I to describe it? A hallucination? A flashback? It was like watching a film and suddenly the actress playing my friend was swapped with the one playing my dead mother, but I was the only one who could see it. Why did my head decide this was a helpful thing? In what way does this solve a slightly dirty uber and a very tipsy lady?

If emotions come from the heart, it was screaming in fear. My head was trying to stay level but for a day or two it was racing. It hovered between a need to look after her and a need to run away and hide from the drunken Mum who was going to force me to go back to looking after her.

I managed to call some friends who took my girlfriend back with them to sober up and sleep while I went home. With her safe, I could focus on myself. Thanks to my medication and some haphazard attempts at mindfulness, I managed to calm down enough to rest and sleep.

I did my normal trick of self isolating and in the end used my knife to self harm. I've still felt low for the past couple of days but no where near as bad. In fact, well enough to try and socialise. Well enough to accept the love and support of friends and put on the mask for the wider world.

Depression is like a lead weight but its only for a short time am I able to lift it.

Stigma is all around and sometimes it is self-inflicted. Sometimes I struggle to be brave enough to say my illness is my mind or brain and how it processes and presents events and emotions. Sometimes it is easier for everyone to blame a jitty stomach. 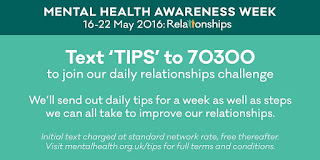 Whilst it is true that our NHS services are underfunded and overwhelmed, you should always feel that you are able to ask for help. The earlier you seek help or support, the more likely you will thrive and even stay in work. As I touched upon in my blog for this year's Depression Awareness Week, the fight for better mental health care has to be twinned with the fight on stigma - something you are fighting now by reading and sharing my blogs and tweets. Every view and retweet means alot to me.

My girlfriend has been amazing in looking after me as have my closest friends. I'm trying to be an adult and survive. I'm trying to fight the battle not just my own personal one but the bigger fight against stigma and the mental health crisis I seem to rant on so much about.

If you delve back through the archive, I've described my anxiety or depression or the wider mental health battles I have as fighting a forest fire. Somedays, I get the upper hand and push the fire back. Other days, I lose ground and become encompassed and swamped. On average I used to think I was pushing the fire back and maybe I'll never have it fully under control but its worth the fight. Recently, I've found fighting hard and now I'm wondering if I'm slowly falling back. Either way, I don't feel I'm the only firefighter battling this fire anymore.

Thank you to my amazing friends and family who have held my hand and supported me and thank you for sharing this blog. Every ad click, video view or retweet not only supports me with a few pence but fights stigma and puts this bigger mental health forest fire back in the forefront.

Ordered myself a @scifiblock to help cheer me up after a poop few days. #notdisapointed xx www.MattStreuli.uk #blogger #mentalhealth #scifiblock #spock #startrek #StarWarsForceAwakens #hitchhikersguidetothegalaxy #fahrenheit451
A photo posted by Matthew E Streuli (@matthewstreuli) on May 17, 2016 at 3:32am PDT