Michelle Ben wants to be your friend

On a rainy Bank Holiday afternoon you get a random Facebook friend request from a nurse in Atlanta, Georgia. Having checked with my long distance girlfriend*, who is also an American nurse, that she is not one of her friends or family I decided that this must be one of those phantom random accounts that adds you and then tries to convince you to lend her your life savings so she can buy a dinghy and row to Bordeaux to buy the hat of destiny otherwise her Nephew's pet gerbil might get his hand cut off or some garbage to that effect.
Click on pictures to make them bigger....

*a bit of gossip for you there.

So I did what any of you would of done, I started talking to her with the aim of seeing if she really was a Nurse let alone an American one. Having run a few names past my fellow American lady to see if they were recognisable I went ahead thinking the person claiming to be Michelle Ben would at least Google the names or facts or locations. But oh no.... Even Terrorist Extortionists put too much faith in this and seem to be believe every fact I produce. Before we start I just want to apologise if I do offend you - this is not my intent - and I do not mean to make light of any heinous crimes they committed it was purely to test whether they were American or were even googling what I was saying. Well you will see...

Also I would like to point out that my Dad is fine. I did lose him in Miniland when I was 10 but the kind people gave me a balloon or something and reunited me shortly after. I remember getting lost in the Tank Museum and getting a free poster. There's a lesson here kids; get lost.

Anyway back to this muppet who you will quickly gather cannot be a Nurse and is unlikely to be from the US.

Firstly it is 7:10pm. Britian's Got Talent is on. For those of you unfamiliar with the format some talented people and some not so talented people that no one has been nice enough to tell them so perform in front of David Williams (a fantastic comedian and author), Simon Cowell (the man responsable for slitting the musical throat of our great nation and drinking its blood), Alisha Dixon (she won Strictly Come Dancing I think and once had a song that was in the top 10) and a blonde woman whose name escapes me but she was in Shrek the Musical for few weeks. As you might infer I have no time for this which I was I answered her.

Do you like the shameless promotion of my YouTube Channel? I bet they didn't even go on it.
My real name is the same as my website, YouTube channel and Facebook and believe me, I am the only Matt Streuli. Go on, have a look. See? So what is my real name? Well, lets pick a convicted child murderer to see if she will google it... 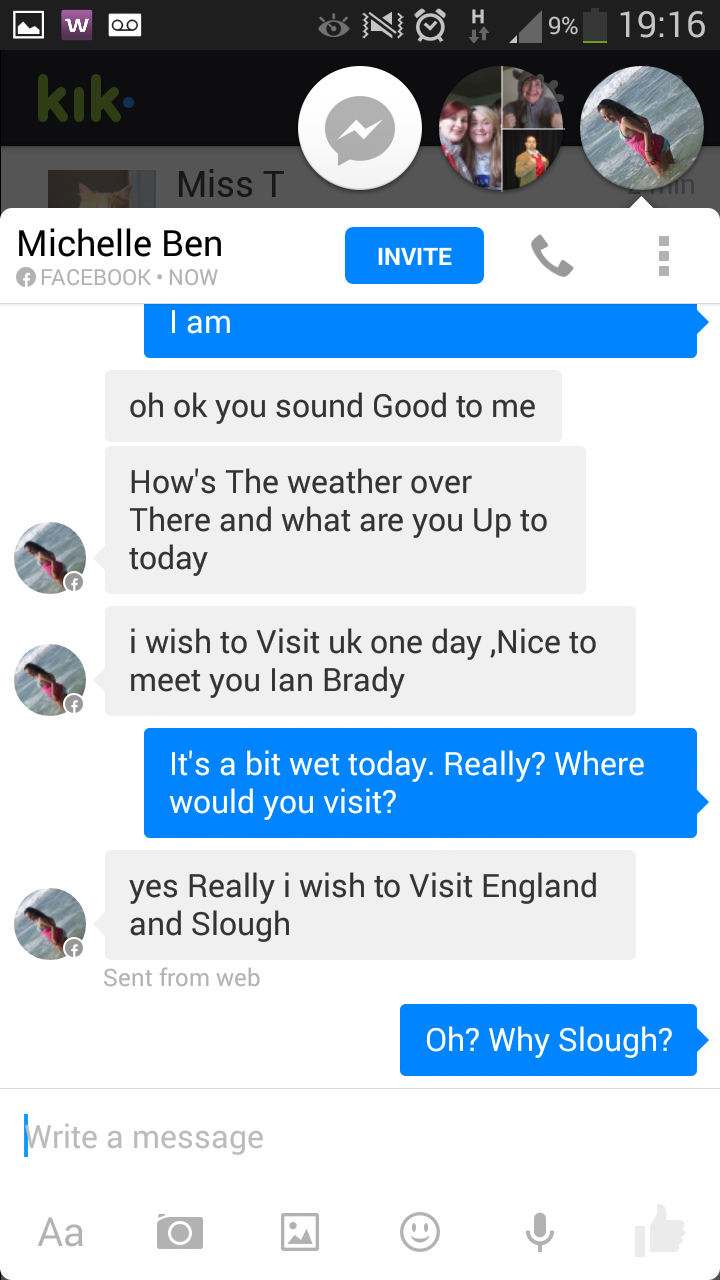 I sound good to her? Well I'm happy.

And proof she/he has not bothered to google my name... I'm not a pervert or a stalker but even I do that... But she has visited my profile to see my hometown is Slough. Perhaps it is becuase I live in Slough, but if I was to visit the UK I would go to one of our fantastic cities: Edinburgh, Cardiff, Manchester, London or Belfast. Not the shit hole called Slough... 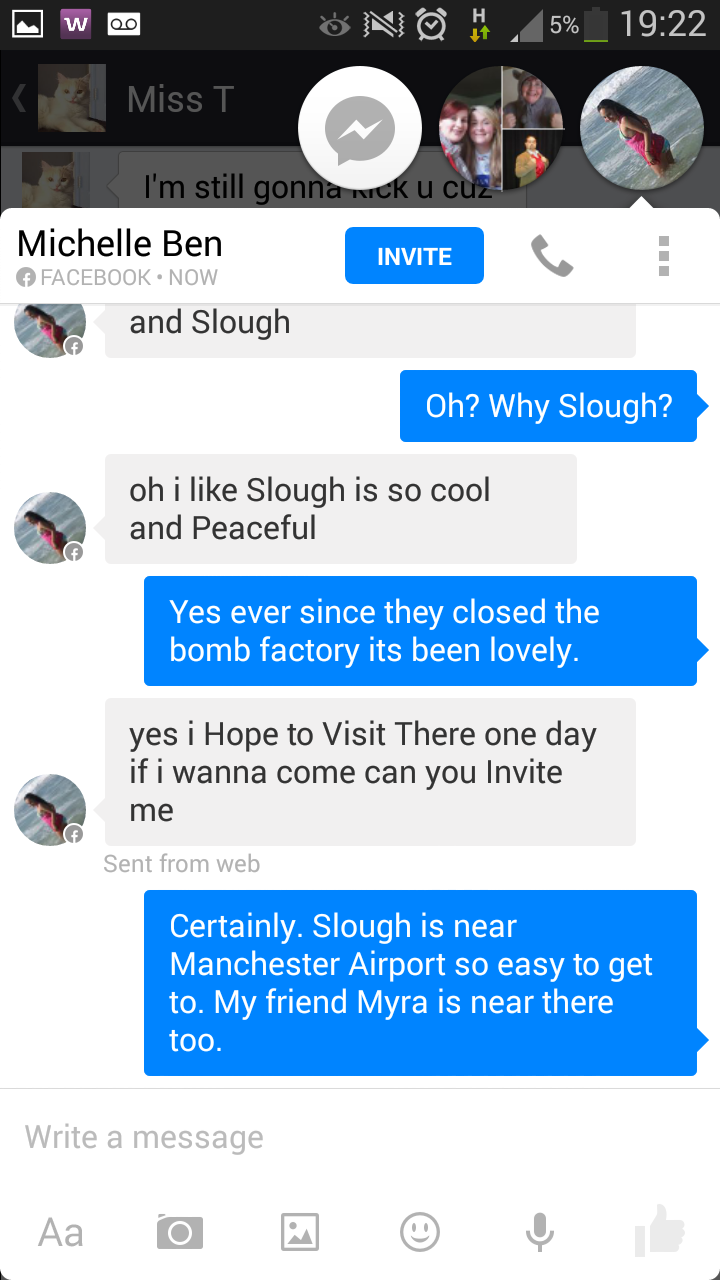 Slough is cool and peaceful? Has she/he even googled it? I bet not so lets see...
Note: No bomb factory in Slough. But if there was one I reckon it would of been quieter post closure.
Note 2: You don't require an invite to visit the UK. Depending on your country you might need a Visa but I don't think we have any border guards so just turn up and walk in.

Note 3: Slough is not near Manchester Airport. It is near Heathrow. They are 3hours apart by car. 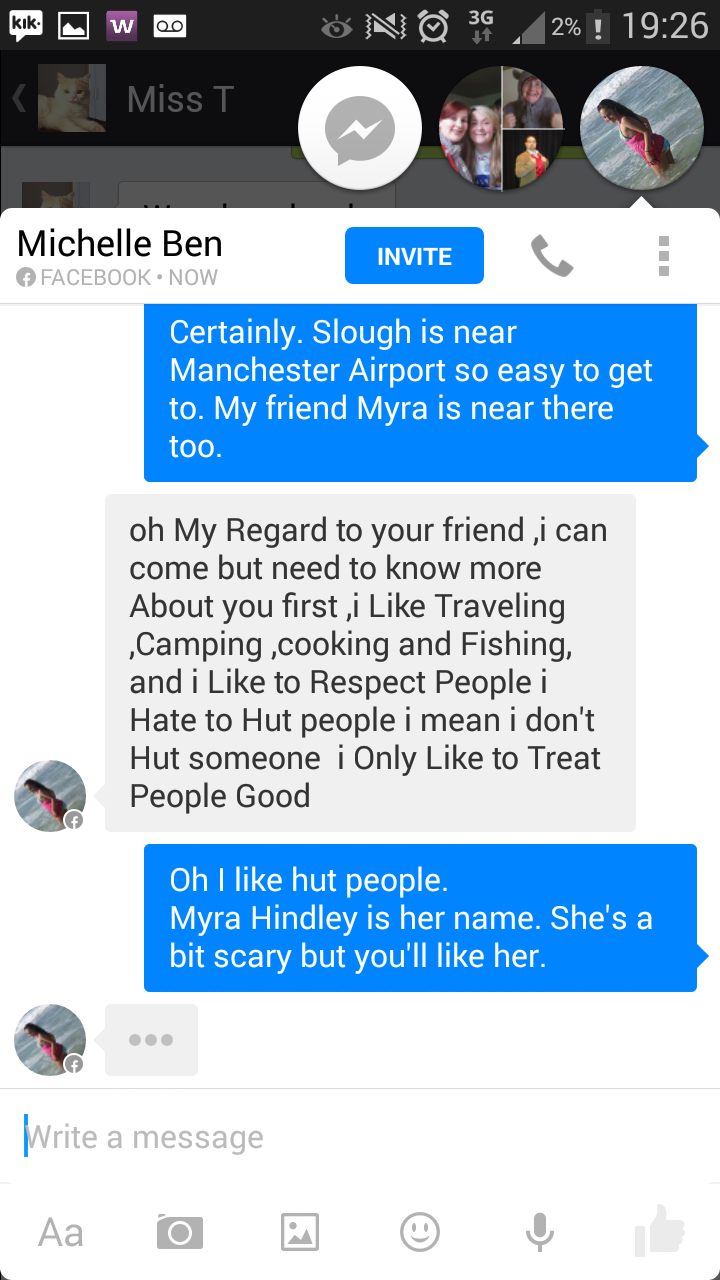 Regards  to my friend Myra? really!?
She hates Hut People. I'm indifferent to them but I'm happy to argue with her/he/it just for fun.
And kids, if you only take one lesson from today it is getting lost gets you free things. If you can take two lessons, then also take that you "only like to treat people good".

Grammar is important if your a nurse... 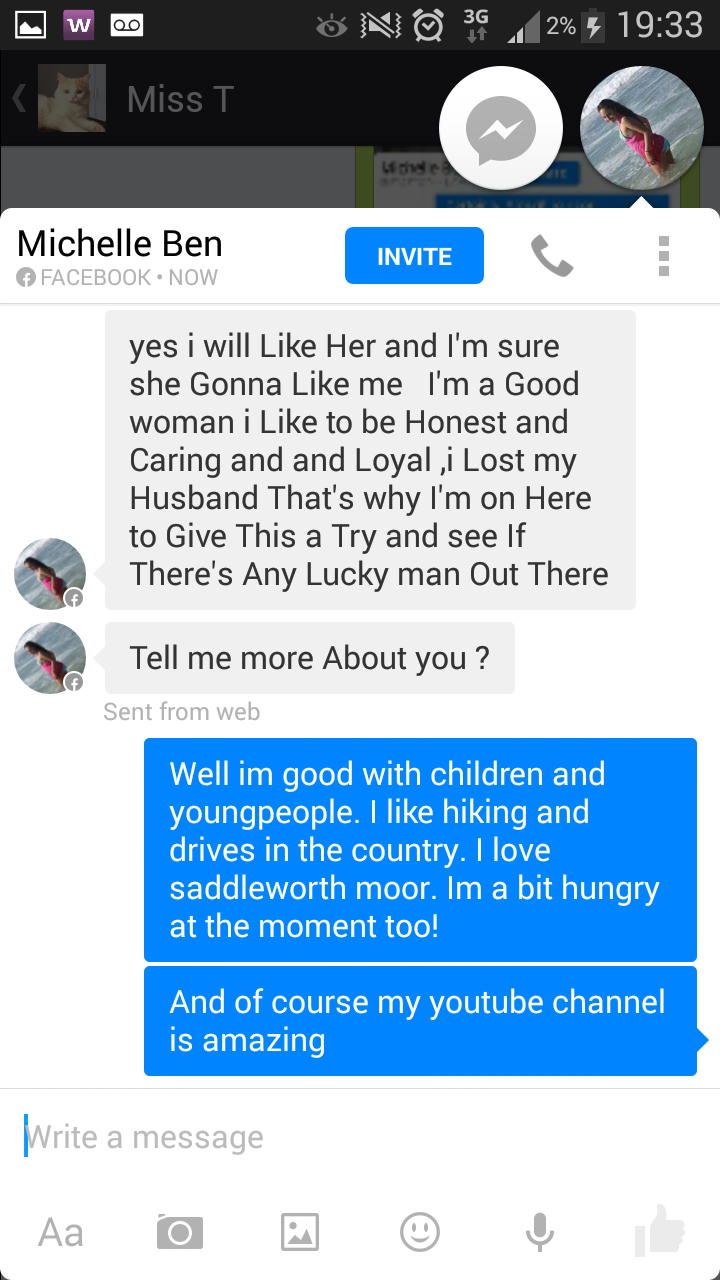 You will like Myra Hindley? Google the name and you'll realise that this is not going anywhere. You like to be honest? Then admit your first language is not English.

Note: Ian Brady would be hungry. He is on hunger strike in a mental health ward still serving his life in prison term. Again, I do not wish to cause offence but I would of thought she would of googled the names by now and blocked me... on we go... 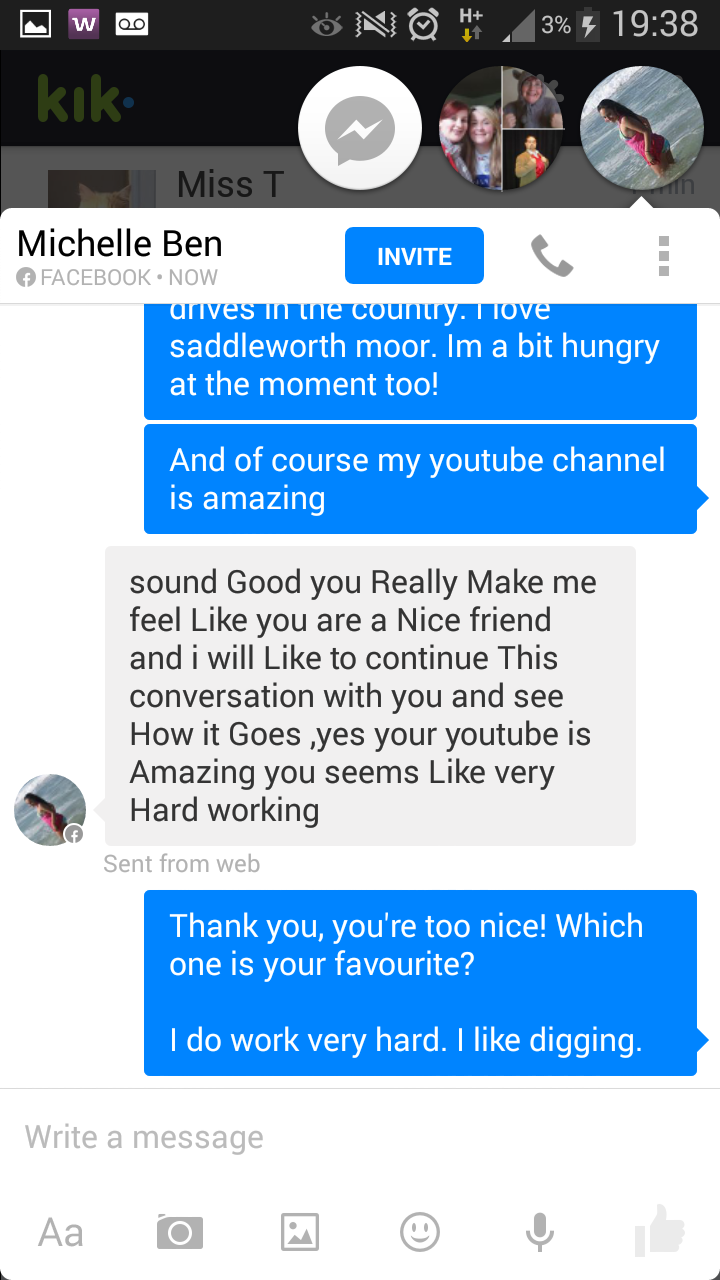 I am nice friend. Thank you.

Hardworking? Yes that describes me.... *cough* Don't you require some sort of qualifications to be a pharmacist? Or can anyone do it?
And yes Digging. She's not getting it is she/he/it? 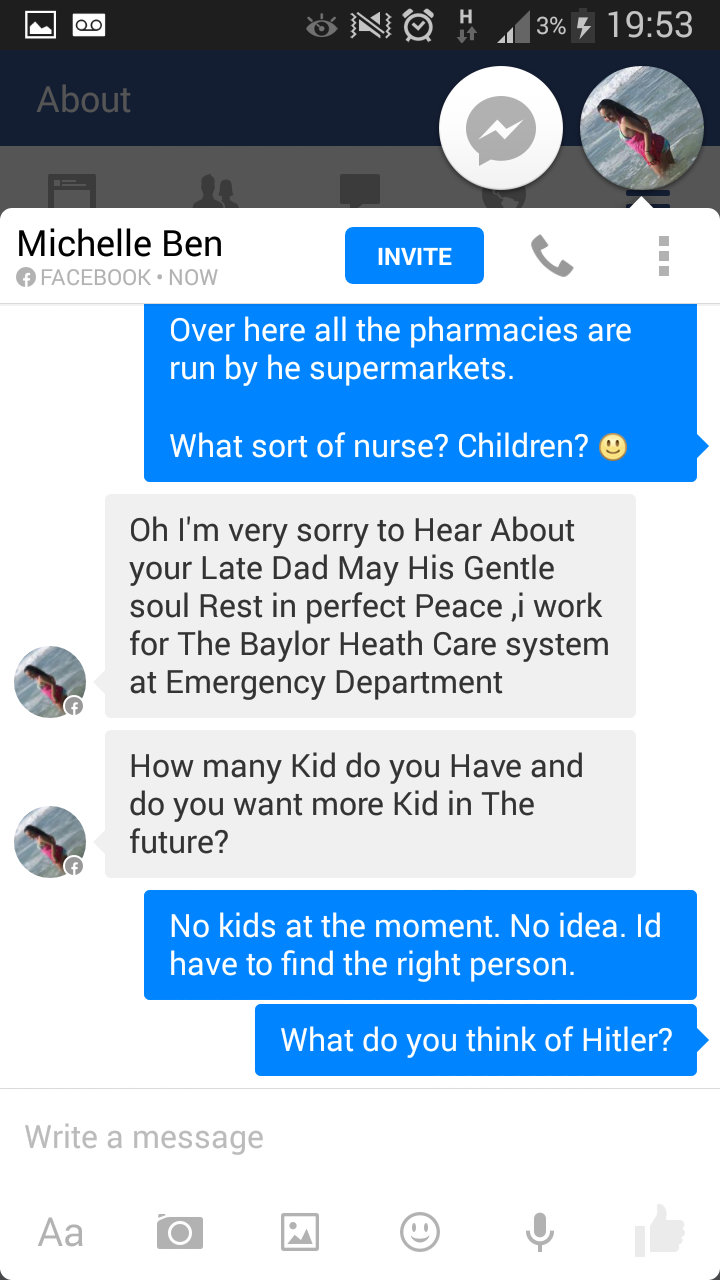 Google The Baylor Health Care System. It is 11hour car journey from where she 'lives'.
How many Kid do you have? well the correct answer is zero. I have no goats. 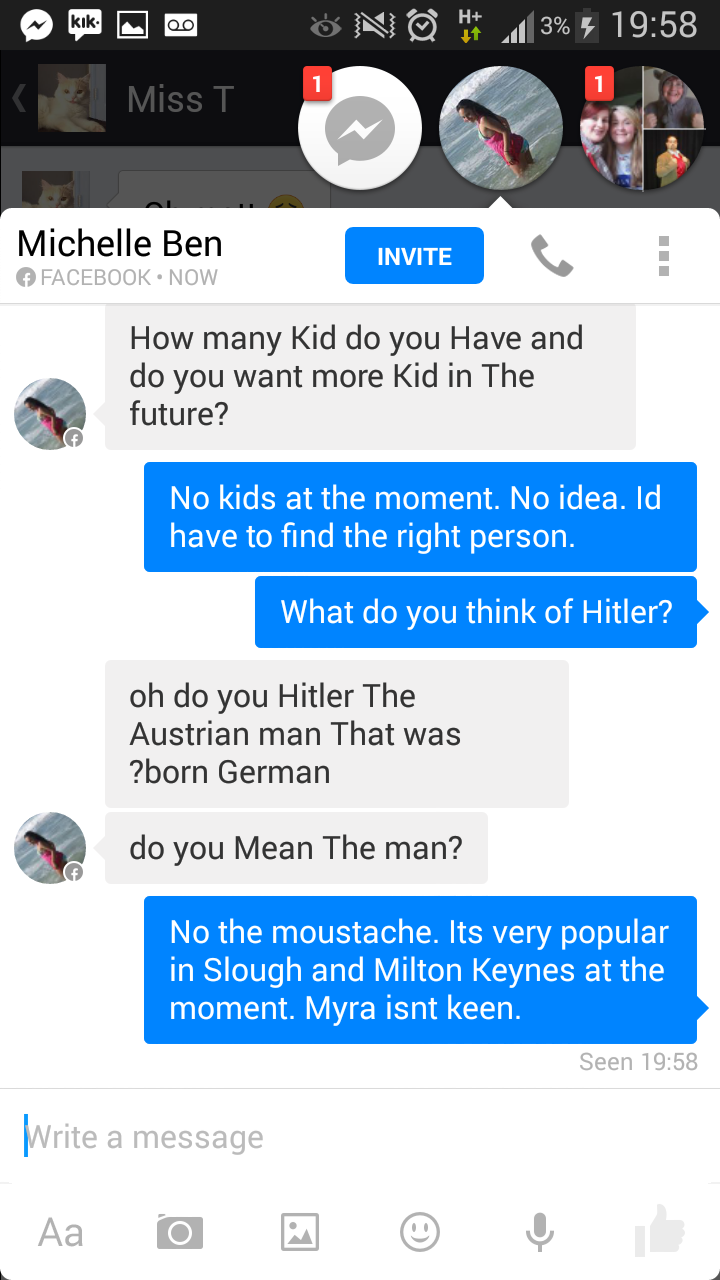 The Austrian man that was born German? Is that the most famous fact about him? really?
I'm still giggling at my reply. Do you think she's beginning to see I'm not taking this seriously? 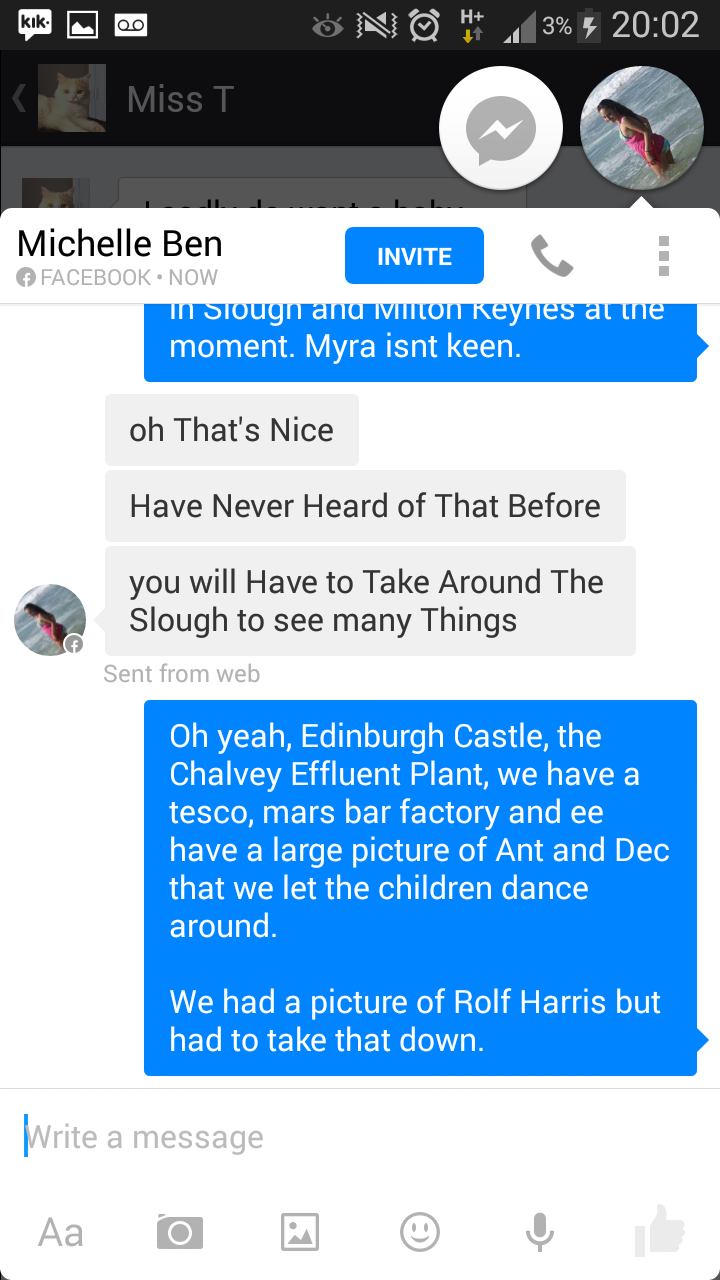 You haven't heard of it because I'm making shit up to annoy you.

Yes the many things of Slough. Can you spot which ones are not real?
And if you don't know what Effluent means you would google it surely? And realise a sewage plant is not really a tourist attraction. Maybe it is to her? Maybe she specialises in rectal exams ? 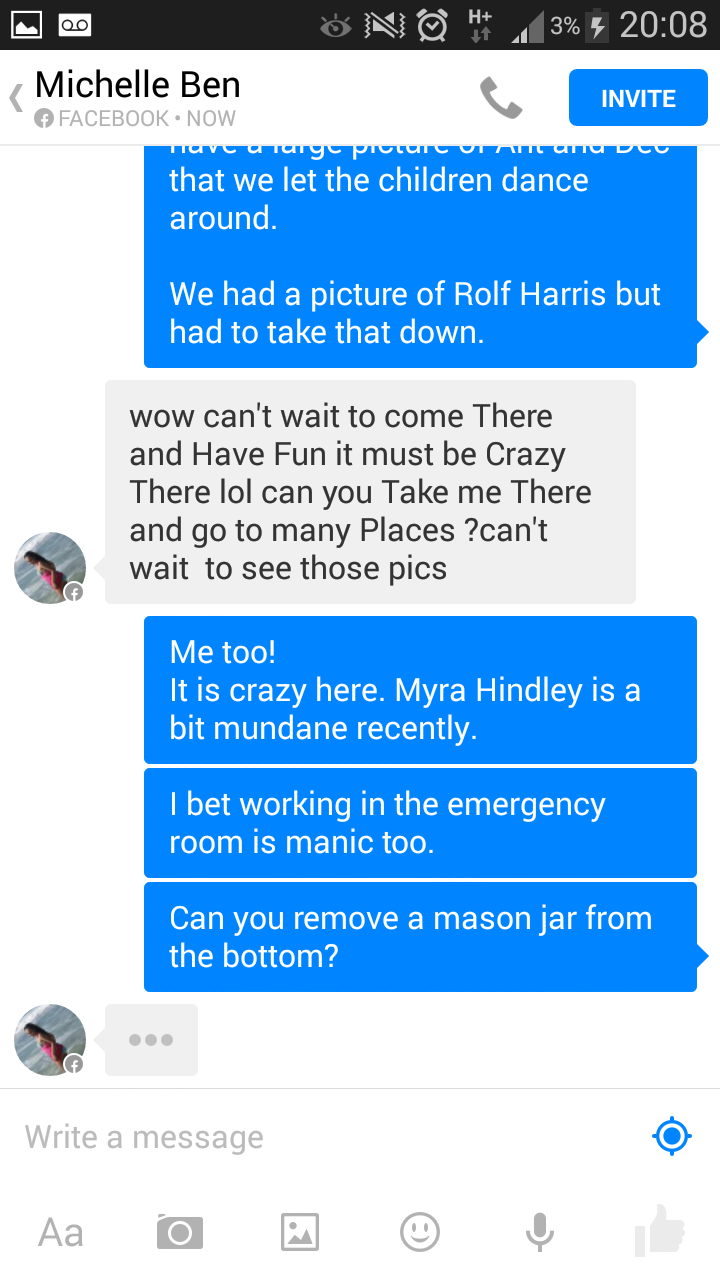 Again, google Rolf Harris. See why Slough took that picture down.
I'd like to point out that to my knowledge there was never a picture of Mr Harris being danced around in Slough but weirder things have happened.

Myra has been quiet of late. Perhaps due to her death 12 years ago.

Note: Mason Jar from the bottom. if you do not get the reference consider yourself lucky. 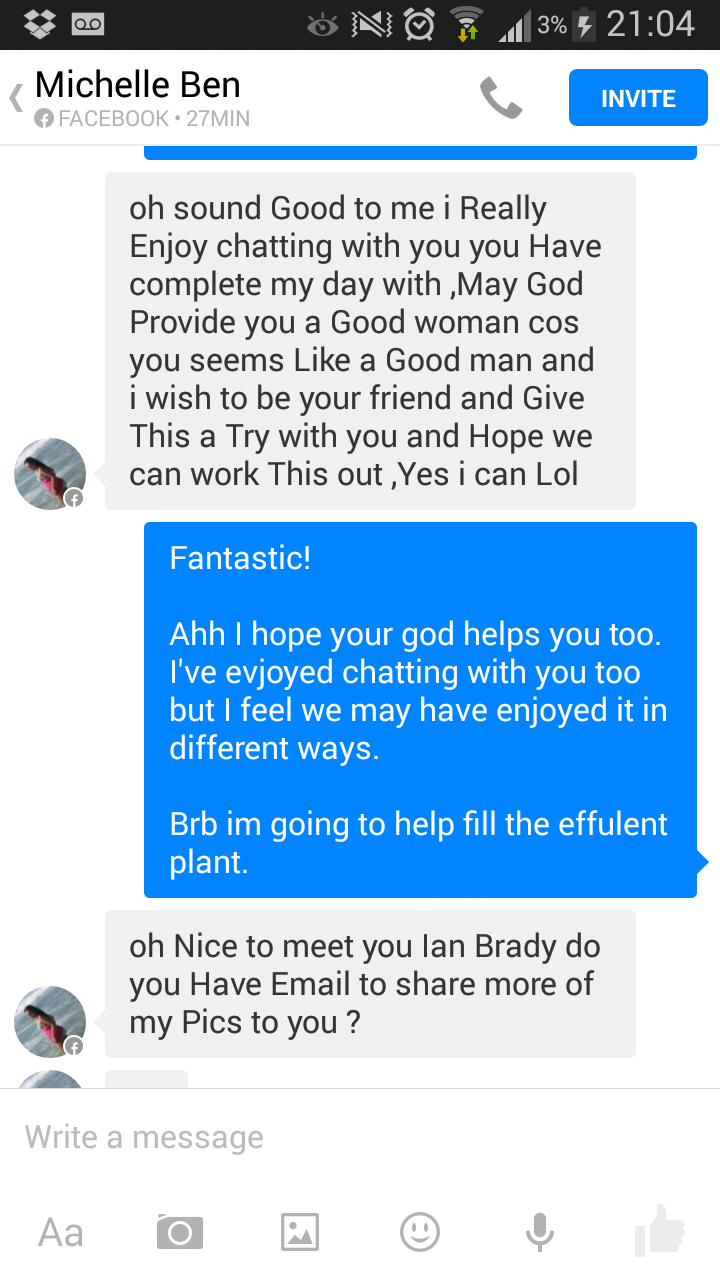 I feel we may have enjoyed it in different ways.

Do you like my method of telling her I was going to the toilet? 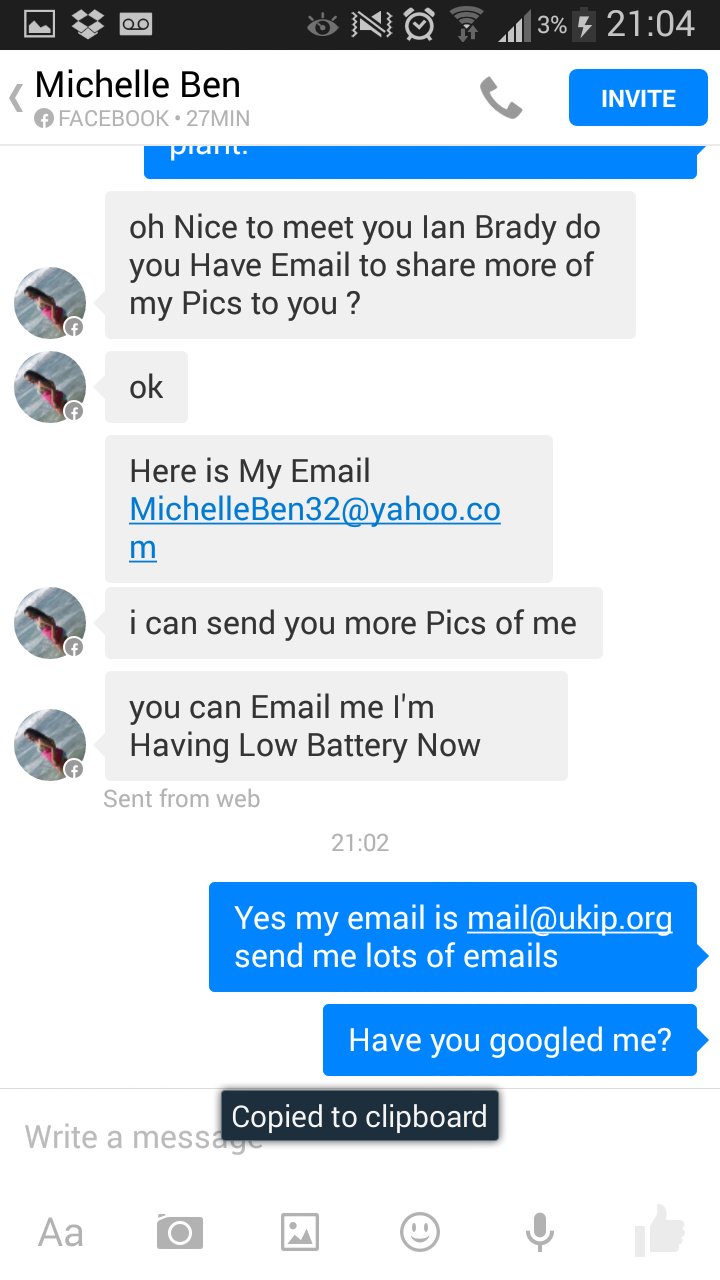 To my disapointment I have not heard from Michelle Ben since but I will let you know if I ever do. Part of me sincerely hopes Nigel Farage is now being bombarded with pictures of a random woman addressed to Ian Brady.

Please do share this if it made you smile if not please do email MichelleBen32@yahoo.com and I am sure she will talk to you about her plans to visit the giant picture of Ant and Dec. 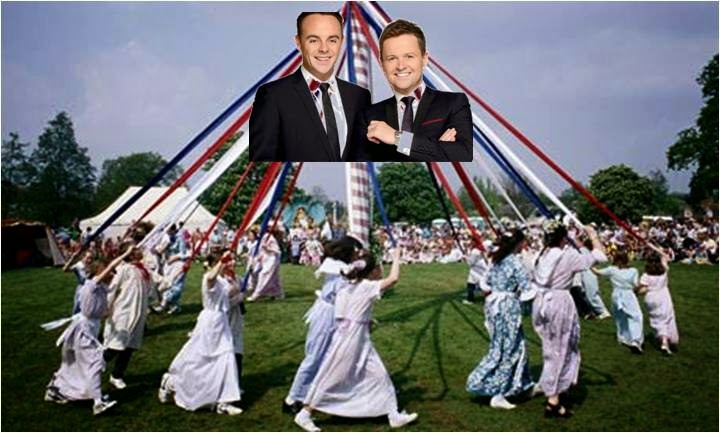