Theresa May in The Crisis From Our Minds 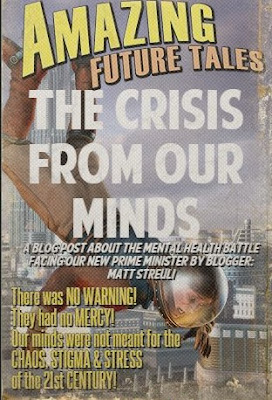 It may sound like a "B" list movie from the 1950's but Mrs May is our next Prime Minister and whilst every other blog is pondering how she will face Brexit or the Tax dodging of whichever evil corporation we despise this season, I'm curious how she will face the mental health crisis.

In essence, do we have reason to hope things can get better?

Her work history is actually quite impressive. She has served in several Cabinets (the main operating committee of the Government) and Shadow Cabinets (the main opposition's version). At one point she was Chair of the Conservative Party and described as a one-nation liberal conservative. Aside from her work as Minister for Women and Equality and is now the longest serving Home Secretary in UK history. To compare our Government to a real-world business, this means she has been a senior executive who actually does the work the CEO boasts about at your annual conference. If I'm starting to sound rather Pro-May its because I'm slowly convincing myself with all the more research I do.


Anne Perkins of The Guardian observed that "she'll be nobody's stooge"

However, actions can speak louder than words and some actions do not reflect well, especially in hindsight.

Perhaps like me, you had forgotten the pet cat? I'm not referring to Larry the Chief Mouser at Downing Street but instead the cat which belonged to a man facing deportation. It brought to attention the quote in the adjacent picture that in summary, this gentlemen was not deported because he owned a cat. This later turned out to be a whisker or two from the truth. Said man was in a real long-term relationship here in the UK and the cat was just one piece of evidence in said tribunal.

Mrs May, through her husband, has links with security firm G4S which also gained some large sub-contracts from HM Government and Police forces during her time as Home Secretary. At one point the Police Federation described her as a 'Bully' with the curious 'unnamed sources' saying she was selling our Police to Serco; however this was after she demanded they make reforms in the wake of scandals such as Stephen Lawrence and cut the extreme high pay for the 'union' leaders out of the tax pocket.

Just a week ago the National Audit Office published a pretty bad report regarding a 'detention centre' called Yarl's Wood. The report criticised  Theresa May’s Home Office and NHS England who gave to Serco and G4S contracts to run Yarl’s Wood’s residential and health services which ‘did not initially meet the needs of the vulnerable population detained there’ 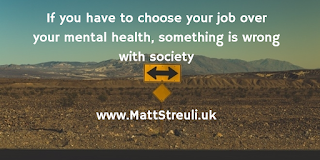 AND THERE IS MORE! However, we all have bad stains in our past. I'm assuming you've read some past posts of my blog so you've seen my trials and tribulations to no end! Perhaps I should focus on how far we have come? A survey by Office for National Statistics in 2007 showed that 22% of people surveyed thought that the mentally ill were “a burden on society”. Shocking but in 9 years alot has changed and some of the seeds seem to be from Mrs May.

In 2012, our Prime Minister was the Home Secretary and she widened the laws on Domestic Violence. Previously it had felt rather cold and logical basing justice on physical damage but now "mental torment" is taken into account. Controlling and Bullying may not be physical but is rightly seen to cause harm now in the eyes of the court.

In the last few days, Theresa May has promised to put real workers on the boards of big business to ensure they start working for employees and not just shareholders. Given my personal, harrowing experience with workplace discrimination, this comes to me with a massive glimmer of hope.

Over the past year £15 million has been allocated to provide medical care for those in mental health need who previously would of been held in a Police cell. Promising this action in 2014, Theresa said "Most members of the public won’t think of the police in relation to people with mental health needs ... Unless you have done something wrong, or been a victim of crime, you won’t expect to come across a police officer. So imagine what it is like for the thousands of people with mental health problems, learning disabilities or other vulnerabilities who regularly encounter the police" I find it slightly scary to say but true to her word, change is slowly happening. In February this year Mrs May banned Police cells being used as a 'place of safety' for all Under 18s. In 2013 a report found that mental health took up 20% of the Police's time and it actually looks like Mrs May is getting the Police back to fighting crime and us, the patients, into some healthcare situation instead of a cell. Along with Karen Bradly (Minister for Preventing Abuse, Exploitation and Crime) and  Alistair Burt (Minister for Mental Health) the use of Police cells for holding mental health patients is down 50%.between 2011 and 2015.


Too often and for far too long, vulnerable people experiencing a mental health crisis who have committed no crime have found themselves in a police cell because there is nowhere else to go. - Karen Brady MP

This isn't an easy battle to win.

As a recent survey from the Youth Health Parliament shows, patients are desperate for earlier intervention with more face-to-face help, there is a still an uphill struggle. My own personal struggle reflects the bigger mental health crisis but I think Theresa May has the tools and the willpower to bring real positive change to the face of mental health and the male suicide crisis. I think we have reason to be optimistic...

Mrs May....
Some children wait 32 weeks for mental health treatment whilst suicide is the biggest killer of men. You might only have a few years but I think this is our best chance to save our lives. It's Time to Change and you can help us do it.

As always thank you for reading and sharing my blog - and even browsing my past posts on my own first hand experience with mental health. Every view and share really helps fight the stigma and spread understanding. xx Below is some of my social media highlights - please enjoy and share :)
Thanks again! Matt xx

.@TheresaMay2016 I'd love to meet/speak about reforms in mental health and workplace discrimination. We can prevent suffering like I faced
— Matt Streuli (@mattstreuli) July 11, 2016

Take time to reflect on your day. Learn, accept and relax. Tomorrow's a new day of opportunities www.MattStreuli.uk #blogger #mentalhealth #inspiration
A photo posted by Matthew E Streuli (@matthewstreuli) on Jul 12, 2016 at 11:05am PDT