BPD to EUPD with face paint and a Go-Pro 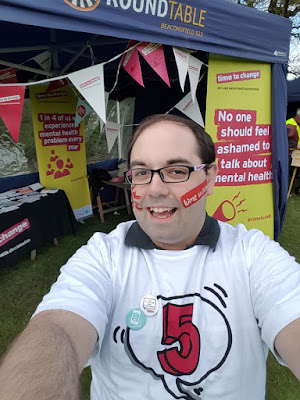 
Sometimes, like last week when I spoke on Depression Awareness week, I end up on a passionate rant or essay about the crisis we face with mental health and the services currently struggling to cope. Other times this blog is quite theraputic of how I feel or can feel like just a diary of someone with a mental illness.

Last week my Psychologist gave me a letter detailing a medical report he had completed for an insurance claim I have. In it my diagnosis has morphed from BPD (Borderline Personality Disorder) to EUPD (Emotionally Unstable Personality Disorder) and I don't like it. Last year I wrote here about how I struggled to accept the BPD label, feeling it was my soul and essence, my personality, that causes all the problems rather than the way I process thoughts, emotions and situations. It took a long time to digest and accept.

In England, EUPD and BPD are almost interchangeable. To me, they sound like they mean two different things. Borderline Personality Disorder, at first glance, to my mind means your mind doesn't quite process things properly; it isn't quite normal but its on the borderline. Whereas Emotionally Unstable creates a first thought image of someone being happy one minute, sad the next and jealous the other. My imagination creates a robot with a malfunction Emotions Chip. However, my calm logically thinking is reminding me that either case it is just a name and does not define my future just helps to explain my situation.

Talking with people is a key part of my work with Time To Change, a campaign run by charities MIND and Rethink Mental Illness with the support of Comic Relief and the Department of Health. Over the weekend, I was at the Beaconsfield Beer Festival and whilst it took some time to psych myself up and use mindfulness and my medication to keep anxiety at bay, I had a really good time chatting with the public and my fellow Champions; Alice, Claire and Angela. One man, who looked very young for his advancing years, told me how he first encountered mental health. Whilst working abroad long term he developed very painful back spasms. After scans and examinations the American Doctor told him there was nothing physically wrong and so the problem was 'in his head'. Perhaps a not-so politically correct way of saying it but his stress and mental health were adversely affecting his physically health. Over the course of the day we spoke with around 50 people in total and large proportion were male. Almost everyone knew someone close or had a mental illness but not as many as I hoped had heard of Time to Change - or of course read my blog!

After the outing to the Beer festival I joined the team back at Drama HQ to see how they were getting on with our loft storage clean out. The work they had done was amazing and I felt quite guilty for not being there all day but I guess a virtue of my rank is that I can occasionally delegate! :P You can find out more about my work for the drama club on the news page of www.ihdc.co.uk which I also author.

In the past few days, I received a letter from the Department of Work and Pensions who acknowledged the many letters sent to them but, yet again, despite my health issues I do not qualify for support. I must of forgotten that is was the disabled who caused the financial crash and thusly it is fair we suffer for it. #Sarcasm

Somethings have changed from last week. I've tried Irn Bru for the first time and actually really liked it. It's ruby red to me for all those synesthesia fans.
Somethings however do not change and for me it is that sense of frustration. Talking to my Psychologist makes it seem like anger. Whilst anger is a good word, there is no violence towards it.

My current 'bug bear' is to do with my work as a 'lollipop man'. It frustrates and antagonises me to see people drive like idiots or break minor laws and get away with it. Part of my fear is the idea that if they do not get 'caught' or 'punished' then they will continue the dangerous and illegal behavior which then probably encourages others to follow suit. This is why I do make  reports for vehicles failing to stop for me as a I enter or leave the road. If you are are wondering what a lollipop man is or what the signals all mean, I do have a special page with more info here. On one hand, the frustration is too much; it is out of my control and I should let it go. On the other hand, the behaviour of some drivers is putting lives, including mine at risk. Below is a video take this week by my small 'action camera' attached to the shaft of my Lollipop sign. In short, a taxi stops allowing a school teacher to get halfway across the road. Then, while I am still in the middle of the road, they proceed to drive off at some speed. The video is below with a link to highlights from one patrol I did the week before. If the drivers actually got fined for failing to stop and driving whilst on their phones, that could actually pay not only for me to sort and edit the 'Lollipop Cam' footage but also fill in a few pot holes whilst making our roads the safer. It really frustrates me that people get away with it.

If that frustration is one side of EUPD, then how about crying at Penny proposing to Leonard and they actually got engaged on Big Bang Theory!? Yeah... I cried. #Soppy

Thank your for reading and sharing my blog. Remember to tune into my radio show every Thursday night (info on my Twitter!) and like and share the media things below... byeee!

Join me at Katrina's and Mark's OPEN MIC NIGHT at The Three Steps, Cowley every 2nd and 4th Thursday from 8pm!

NEW VIDEO! In which some people sing well and I fall in love with Pedro #livemusic https://t.co/rybNhgxucQ
— Matt Streuli (@mattstreuli) April 18, 2016