Research released today by Mind, the Mental Health Charity in England and Wales, show that men are twice as likely to suffer from mental health issues caused by their job than women. If you've been reading my blog for while, this will resonate with my story. My previous job caused my mental health to diminish until in 2015 when I tried to kill myself.

I asked for help several times and was signed off work more than once. When I went to the office with the 'latest' sick note and told my senior manager I had been signed off due to stress he replied "No one else has a problem." He even tried to convince me to resign. Despite the reports and advice from the company's appointed Doctor and the evidence from my NHS psychologist and GP, they simply didn't care enough to make minor and cheap changes. I felt disposable. I had been injured, my mental health had been made worse to the point of suicide and yet I was made to feel it was my fault. How can it be my fault for hitting targets, asking for help and reasonable adjustments while trying to keep on ever increasing piles of work?


And yet, as shocking as my story might be, it is not a one-off. Stress and other mental health problems are the second biggest cause of sickness absence, accounting for 70 million lost working days every year.

In 2016 the family of Dr Rose Polge, 25, called for action to halt the "crisis" affecting trainee doctors after she went missing and took her own life. According to the BBC she is one of three Junior Doctors to go missing or take their own lives related to their employment. One anesthetist wrote on the British Medical Journal website that "Just as safety is everyone's business, so is safeguarding friends & colleagues."

Meanwhile, a Psychiatrist from Wales wrote:"Every suicide is a potentially preventable tragedy. Each one of my medical school reunions is marked by ...  our fellow med students who are no longer with us - we have lost more to suicide than for any other reason"

My story is just one of the 15,000 in this research that show this 'disposable' use of humans isn't limited to the medical profession or to office workers; it's an epidemic.


The research, which comes from a survey of 15,000 employees across 30 organisations, is released as Mind urges employers to sign up to the Workplace Wellbeing Index 2017/18.

The new data from Mind also shows that men are less prepared to seek help and take time off than women. Alarmingly it suggests that although men are more likely to have mental health problems because of their job, women are more likely to open up and seek support from their line manager or employer. 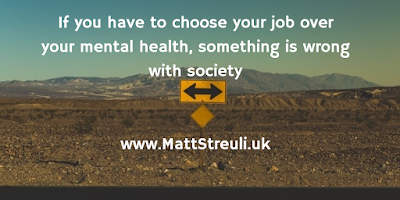 In the end, I took the company to employment tribunal through ACAS but settled before the first hearing. By this point, it was months after ending up on long-term sick and having my pay cut off, I needed the money. Yet all of this, including my ongoing mental health issues, could have been prevented if the adjustments recommended by the company's Doctor weren't ignored or if the ideas in the Workplace Wellbeing Index were adopted.


(Workplace Wellbeing Index) is a benchmark of best policy and practice when it comes to staff mental health, designed to celebrate the good work employers are doing and to provide key recommendations on the specific areas where there is room to improve.

How can forcing Male staff to suicide make business sense when mental health costs employers £30billion PER YEAR?
For every 80p spent on Mental Health promotion, it has been shown to save £4 on costs (sick pay, tribunals, HR interventions, lost business). According to Mind's 2016/2017 Index, 10% of employees rated their current mental health as currently poor or very poor. Over a quarter said this was due to problems at work, not home.

Thirty organisations have joined the previous Index including the Environment Agency, Jaguar Land Rover, PepsiCo, Deloitte and Barnardo’s. Mind is now calling on forward thinking employers who want a thriving workforce rather than a barely surviving one to sign up and join these companies in the 2017/2018 Index.

If you are an unconvinced Manager or without-heart in HR, then look at the figures - can you afford not to join the Index?


Employers can find out more at www.mind.org.uk/workplace


Matt Streuli is blogger and Actor based in Iver Heath, on the edge of West London. Read more of his story and what happened next by clicking here.

with thanks to Claire Bennett at Mind's media team.
For interviews with Mind or myself, please contact the Mind Media Team on 0208 522 1743 or email media@mind.org.uk